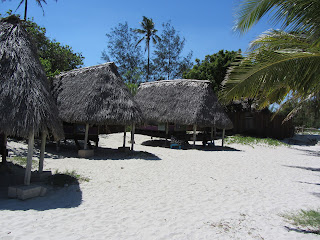 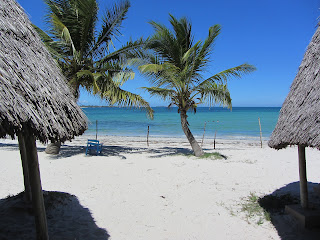 What an adventure it was! I had the most amazing time in Tanzania!  Most of the planning that made it such an awesome adventure was done by a few awesome people (Alana and Rebecca mostly) and I thank them sincerely.  We started out with a whole cluster-cuss of dealing with Rwanda Air (who ended up losing my bag on the way back).  They bumped back the time of our flight by some 4 hours and didn’t think to let us know that.  It was a mess, but we got through it and only arrived in Dar es Salaam a couple hours later than we had planned.  We stayed at this amazing little place right on the Indian Ocean in these little Bandas on the beach.  It was awesome and the staff were all really chill folks.  The only problem was that their wells had been almost completely infiltrated by salt water, so there was no rinsing that salt off which was.  So the pool was also salt and chlorine and that was kind of weird.  But the place was great and we made friends with other guests from all over the world.  These low budget lodging places are so much better than staying in a nice hotel because of the interesting, awesome people you meet.
We has Christmas there and the staff put together a fantastic buffet.  The amazing food in Tanzania is really the thing that made me least excited to go back to Uganda.  Uganda is a little behind the times in using the spices that everyone else in East Africa uses to make their food delicious... resulting in non-deliciousness in Uganda. After my first meal back in Uganda, I almost regretted taking my taste buds on a vacation that made them a bunch of snobby, high nosed bitches.  But then again (to paraphrase my man Billy), better to have lobsterbated and lost than to never have lobsterbated at all.  Anyways, Christmas never really felt like Christmas.  I just don't think it could when it's 95 degrees and I'm drinking cold beers on a beach.  And I am absolutely okay with that. 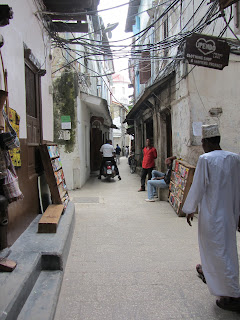 The day after Christmas, we hopped on a ferry (with AC!) and cruised to the island of Zanzibar.  The first 3 days in Dar were awesome, but Zanzibar was even cooler.  We landed in Stone Town which is this beautiful, Greek looking town where most of the roads are too narrow for cars.  We stayed about 45 minutes away on the east side of the island where the awesome beaches are.
I didn't have a cell phone or a watch for this entire trip so the days really blurred together.  Having no sense of time and no means of communication allowed me to just go with the flow and see where the tides would take me.  One of these blurred together days, I went with my good buds, Mark, Kirk, David, Michelle and her brother Mike into stone town with the intention of going on one of these spice tours that I'd been hearing all kinds of awesome things about.  I never did end up doing that tour, but I think we had a far better time checking out Stone Town.  I had the worst public transit experience that I've yet had in Africa that morning, which almost resulted in me puking on all over some sweet, old ladies Burka.  We got into Stone Town and Kirk had somehow found a guide who was going to show us around.  The first thing he did was brought us to buy these fruits (very similar to coconuts) that we drank from and it totally cured my motion sickness/hangover.  It was at that point that I knew this guy was awesome and it was going to be a good day.  We asked him how much it costed to have him as our guide and he told us we could pay whatever we wanted.  That was a really amazing thing I saw in that country is how people don't expect to get paid for every nice thing they do.  I got so many free rides, even from taxi drivers, throughout the whole trip.  I hate to say it, but you would never see that in Uganda. 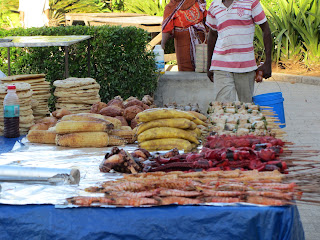 Our guide, Sa'id, was the coolest.  He knew all the history, from Freddy Mercury's birthplace to the slave market, he was knew his stuff and the cool places to go.  We even checked out the Sultan's old bath house built in 1870 that had hot water.  It was really great and it ended with the most amazing street sea food market.  Cheap lobster and shark skewers, pizzas (calzone style) filled with sea food, octopus and this fresh sugar cane, lemon and ginger juice all with the freshest, most exotic spices and spicy mango salsa.  After filling our stomachs with sea food and our minds with the rich history and culture of the west coast of Zanzibar, we headed back to the beach for an awesome night with new and old friends. 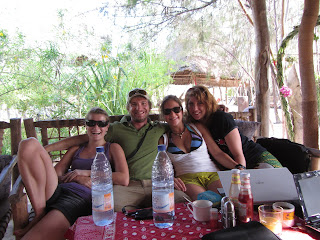 The place we stayed was a short walk from the beach, but cheaper than the big resorts on the beach.  With all the walking and swimming I did, I think I came back in better shape than when I left.  Peace Corps Volunteers from all over Africa were on this beach including about 20 from Uganda.  I don't know if I actually met an American that wasn't Peace Corps.  Lots of Germans and Swedes who were all awesome.  I met these German girls that were super awesome.  I spent a lot of time with them and hope to someday visit them in Germany or wherever their travels land them.  We spent new years together and, after dancing all night, ended up swimming in the ocean as the sun rose.  Probably the best New Years I've had.
On the way home, Rwanda Air lost my bag and I was sure it was going to be a pain in the ass to get back. The customer service was non-existent when Alana was getting hung up on while trying to figure out our flight out of Uganda, but a saint of a man named Rogers (AKA Mr. Rogers because of his helpfulness and boundless altruism) was the one who had saved the day and gotten us to Dar only a few hours late (when our friends who had dealt with someone else from the same airlines had to wait another 2 days).  I was getting nowhere with the person I was talking to about getting my bag back, but Alana still had Mr. Rogers personal number.  So I call him up and within 5 minutes he's located my bag and got it on it's way to Kampala.  He even offered to get it on a bus to Mukono so it could be delivered to my house.  We both decided it was not worth tempting fate with Ugandan transit, but they are going to cover my transport to go get it in Kampala.  I realize that something like this in the US would be looked at as awful customer service but believe me, this is above and beyond in the UG.
As I sit on my couch writing this blog, itching to the point of insanity from sand flees and mosquitoes (and hopefully not bed bugs), flat broke, without most of my worldly possessions, realizing that sea food comes out much less elegantly than it goes in, but having just been visited by my good friend Maurice to wish me a happy new year and ask how my trip was, I find myself on a peak of this emotional roller coaster.

Posted by Aaron Blanchard at 6:22 AM