Just got back from a crazy few weeks of Uganda travel.  I tried to get as much out of my last visit to the west as I could.  The vacation began with me missing the Post Bus (the only bus in Uganda that leaves at a certain time, rather than waiting for the bus to fill which can take hours).  So I had to wait an extra hour to start the 8 hour ride down to Kabale, a beautiful, high elevation area next to the beautiful Lake Binyonyi.  I used to bitch and moan about the 2 hour drive from Seattle to Ellensburg, now an 8 hour ride on terrible roads with some huge, sweaty Ugandan lady and her kid spilling over into my seat is no big deal.  It was worth the journey.  About 15 of us booked up all the dorm rooms on a beautiful island on Lake Binyonyi for Easter weekend.  This was an important trip because so many people that I came here with are leaving.  The controversial Anti-Homosexuality Bill that was recently passed in Uganda resulted in my group (the next group of PC Volunteers to leave Uganda) having the option of leaving early without any consequences.  Many of my friends who have run out of work are taking advantage of that.  As much as I wish them all the best, it totally sucks watching them leave for those of us who are sticking around a while longer.  So, on that island, I said goodbye to the first few of my good friends to leave.  This was how the whole trip went.  Awesome experiences, followed by sad goodbyes. 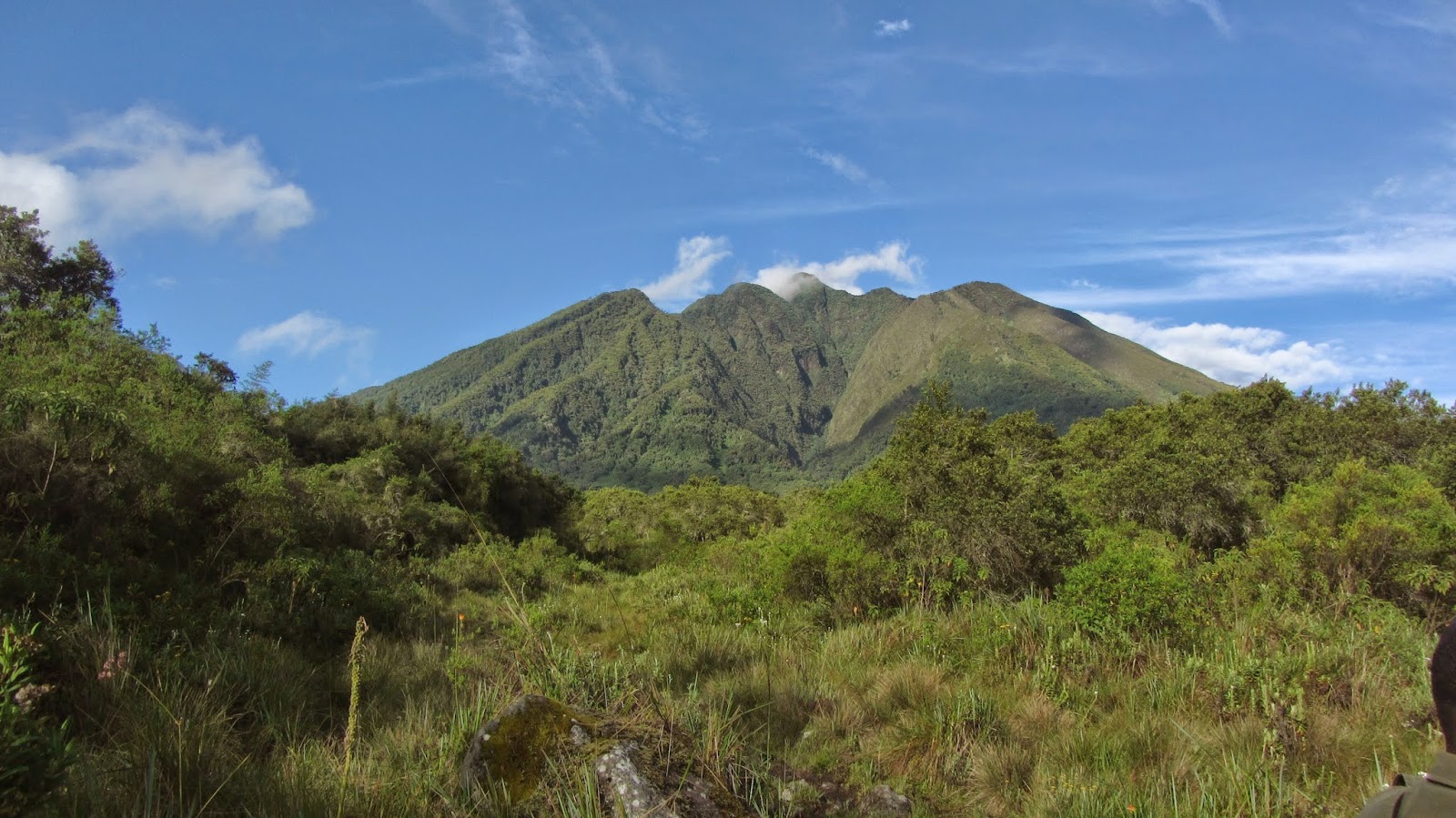 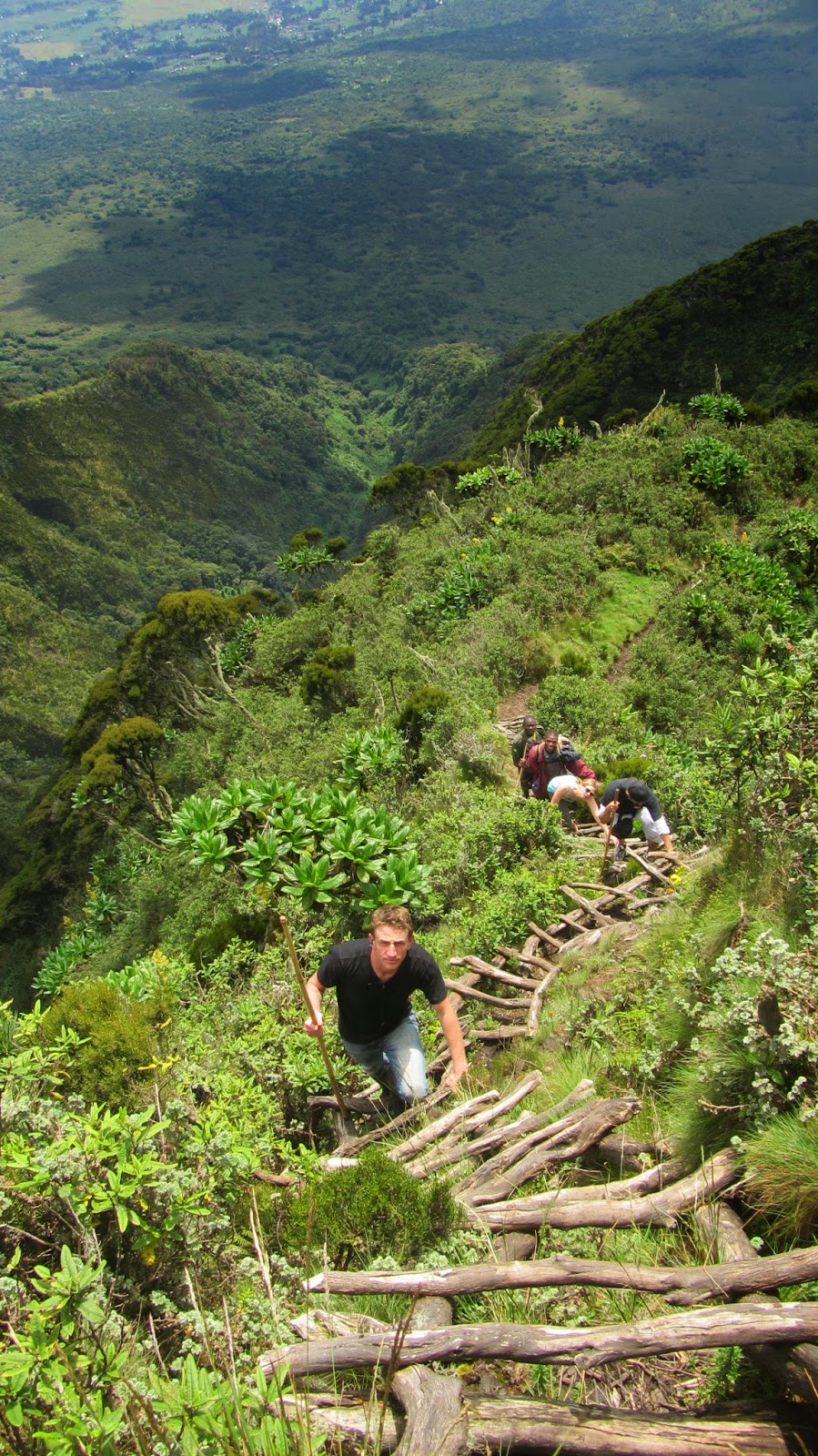 Wanting to maximize my time in the South West, I got a small group together to climb a mountain that I’d been wanting to get at since I learned about it last year.  Mount Sabinyo is around 10,000ft and would be impossible to summit without the janky ladders that take you up the cliff sides.  It was a Peace Corps Volunteers project some years back and it’s been well maintained by the local people.  You go through a swamp for an hour, then through an amazing, pristine bamboo forest before beginning the ascent.  Then it’s up a single ridge to the first peak and continuously steeper ridges until you reach the 3rd peak which is where Rwanda, Uganda and DRC all meet.  The last ladder is over 400 steps up almost vertical cliff side.  It’s absolutely spectacular at the top.
The next leg of our journey took Craig and I North another 8 hours, through Queen Elizabeth National Park, where we saw a huge group of elephants, to stay with some awesome PCV friends in Bwera.  PCVs have no problem sleeping anywhere: 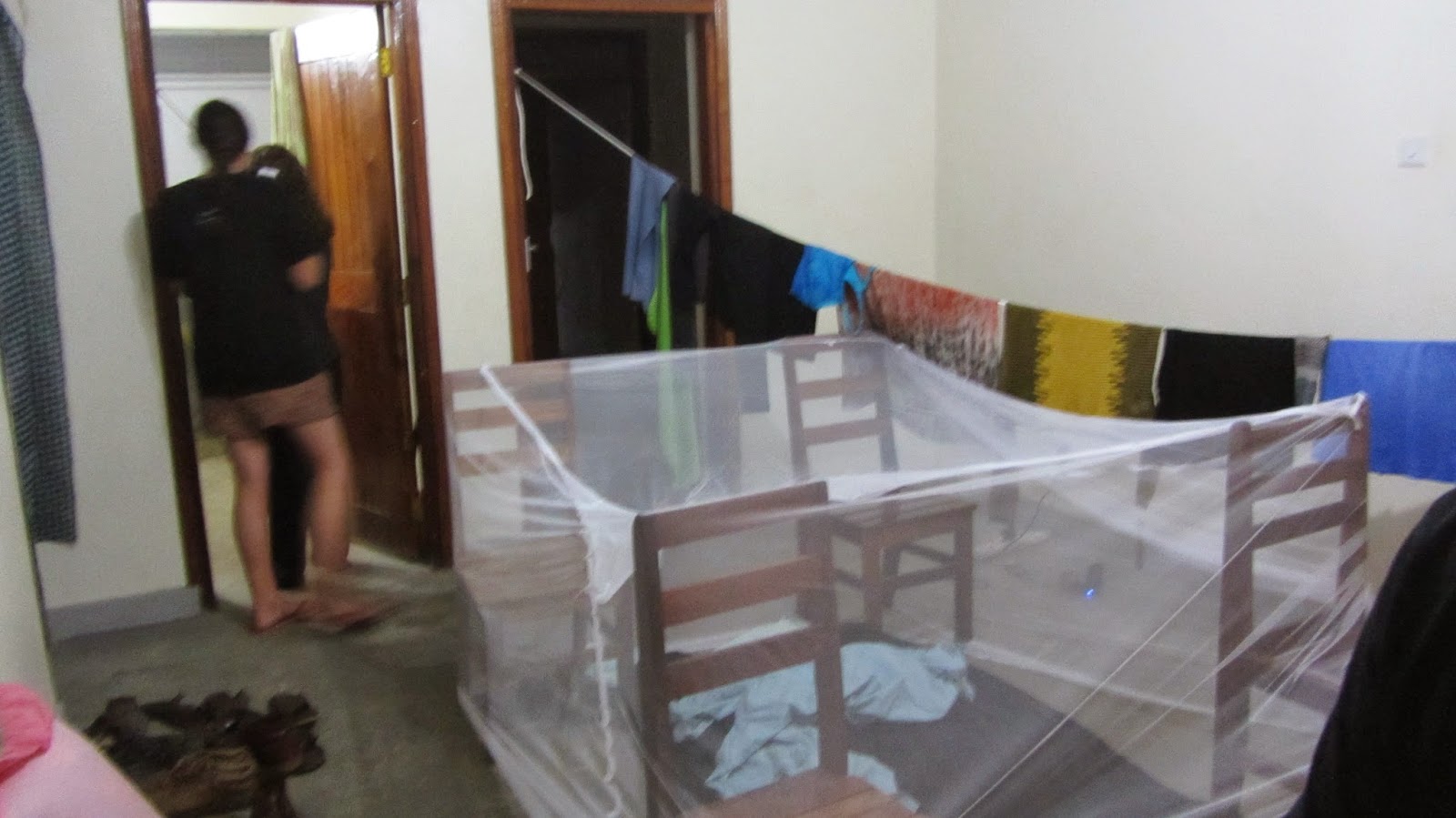 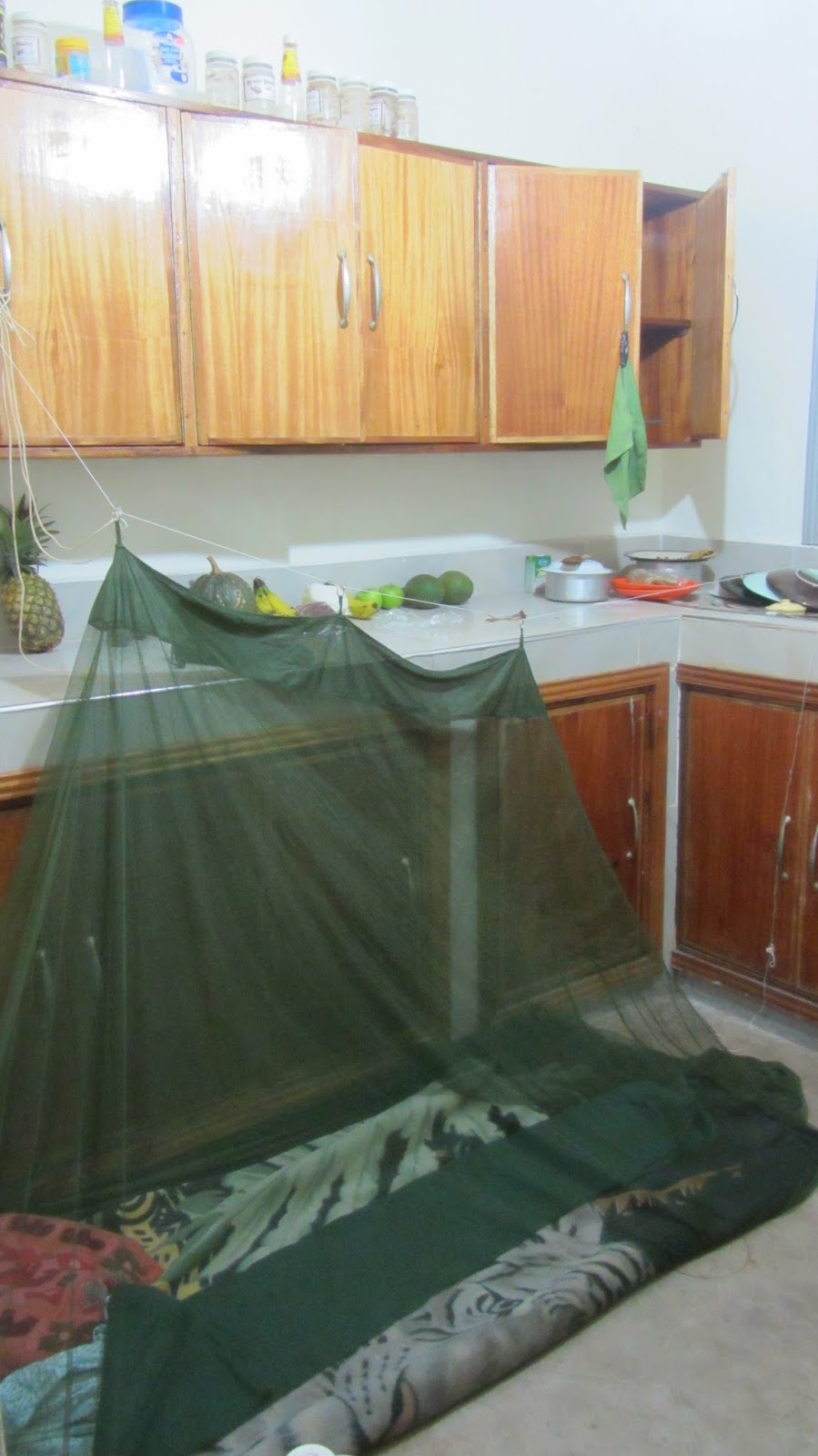 A few days later, it was time for my second and final camp counseling experience in Uganda.
I’d never really interacted with young girls until this camp, much the same way I had never interacted with boys until my first camp.  Girls are way better and they keep the boys in check.  This camp was mixed gender groups and I think that’s why it went so smoothly.  My team of 4 boys and 4 girls (ages 13 – 18) were assigned Ivory Coast in the World Cup theme of the camp.  They were great and my co-counselor was awesome too.  The other theme was income generating activities.  So there were a lot of sessions on business skills and professionalism and then specific skills like making planters and candles and scarfs out of t-shirts.  I think the last camp was too scattered in attempting to hit all of the major development topics (water/sanitation, income generation, gender, HIV, agriculture, safe sex, etc.).  This camp was more concise and I liked that.  I almost strangled one of my kids when he was the biggest proponent to the idea of beating your wife to “strengthen the family.” 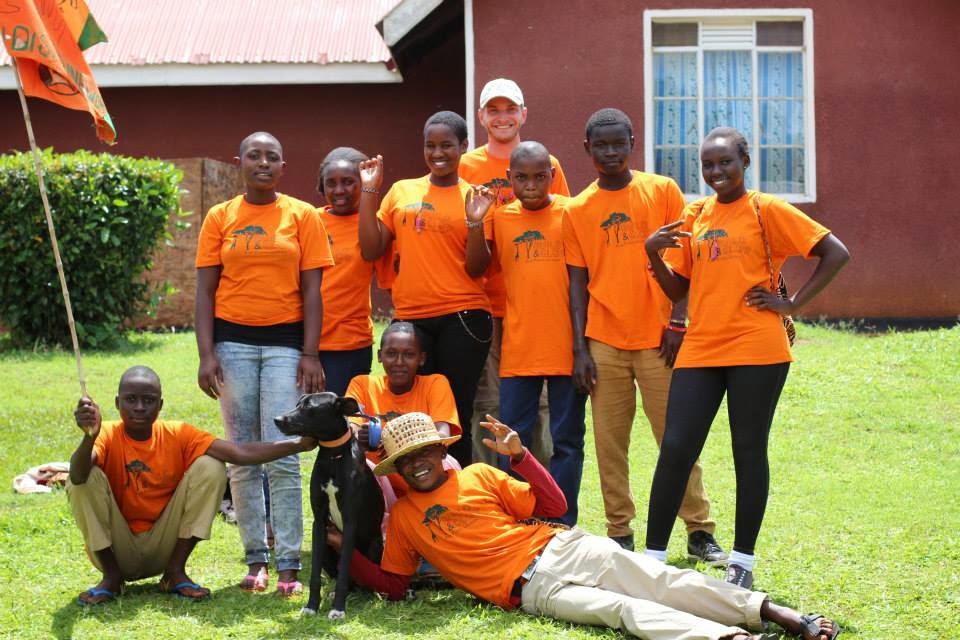 I hope that the reactions from his peers and the staff were enough to make him see it from the wives point of view.  This idea of the husband not beating the wife may have been an entirely new concept for him.  Other than that, I loved my group, even that kid – Osbert.  It seemed like every group had a confident kid that spoke up a lot in sessions and assemblies and mine was Professor Osbert (as we called him) and he would never miss an opportunity to throw out the most offensive, inappropriate bigotry and hatred.  He was definitely my most improved kid by the end.

After camp, most of the staff and counselors hung around beautiful Fort Portal where we had bon fires and got all deep sentimental about our futures and  how much we’d grown and all that garbage.  From my buddy Peezi Glizi, I bought a Martin Backpacker travel guitar which was built for my exact lifestyle and I love it.  After some seriously sad goodbyes to some of my best friends who I went through everything with out here, it was back to the forest.  And I very quickly realized that I definitely could not afford to be buying a new guitar right now.  So I have just enough money to feed myself for the next 2 weeks.  And then BOTH solar inverters went out at the same time and so I am left without any way to charge my laptop and therefore without any media, in the woods alone.  I literally scrounged in the couch cushions to scrape together enough change for the ride to where I’m typing and charging from right now.  At least I’ll have media tonight…  And my new guitar can certainly help kill some evening hours.  As for tomorrow, I don’t know what I’ll do.  It’s a battle with boredom while I wait for my last 2 grants to come in.
Oh yeah, I’m trying to get in 2 more grants before I leave August 1st!  One is a Pollination Project grant which will be used to have beautiful nature scenes painted all over camp, just like the one I had done in our reception, except on the outside of the buildings.  The other grant is a supplemental grant for the Skyway.  We’re going to make a few improvements and get a bunch more gear so they can wait longer before needing to replace it again.  Both of these grants have experienced some big delays which is going to make my last couple months crazy busy.  But until that money comes in, I’m just chillin in the forest.


In other news, looks like I don’t qualify for the Mechanical and Aerospace Engineering Masters Program at University of Missouri and I just have one thing to say to those no good, piston pumpers:  “Yeah, you’re probably right.”  So I’m looking into their Civil and Environmental Engineering Masters Program which would probably suit my interests more.  No matter what happens, I am eligible for this Returned Peace Corps Volunteer Fellowship that is pretty much handing out Masters Degrees from U of M for free! Since I still have no real career path, why not kill 2 more years in school.  And I can’t apply until 2015 cause I haven’t even taken the GRE, so Boosh!  I just bought another 3 years of not having to know what I’m doing with my life!
Posted by Aaron Blanchard at 4:00 AM