I’ve given up on the tiny, translucent, red ants that have invited themselves into my bread bag.  These are seriously crafty little bastards; they can slip through the seal of a Pringles lid and just when you think you’ve blown, flicked or picked them all away, one will emerge from a crevasse and crawl onto your hand as if mocking your feeble efforts to control nature.  They aren’t disease harboring and lord knows I need to pick up protein wherever I can get it, so screw it! NOM NOM NOM! Suck it hymenoptera!!
I’ve been at my new site for about a month now and my experience has, thus far, been truly amazing.  There is a lot that I can do to be of help here, but the biggest challenge is the isolation.  I’ve always been able to enjoy solitude, so loneliness hasn’t been too big of a problem so far.  I have people come visit often and I get out to Mukono regularly to see friends which helps keep me balanced.  I’ve also started to get to know some folks around my village.  What a drastic change it has been from living in Mukono. It felt so weird to be in such a busy place with everyone hustling around, trying to get some small money just to get by while I effortlessly passed the days, more concerned with avoiding boredom than anything.  If I had been with an organization for which I felt some kind of ownership or commitment or that I was making a difference, Mukono would have been better.  Then again, I had never imagined my Peace Corps experience to be located just a short walk from a supermarket and a night club.  I rationalized it by thinking that life would be such a drag if I didn’t have a flushing toilet and a shower and such readily available (junk) food.  In reality, I was living just like I had back home and those little challenges I was worried about have turned out to be the best part out here.  It’s really similar to when I worked at Mt. St. Helens.  I plan out my meals for the week and cook on charcoal (when Betty isn’t around).
Betty has turned out to be awesome!  A few weekends ago, Craig, Alana, Zoey and Alexus came out to stay with me and it turned out that these 3 awesome UK folks had found out about the camp and come for the weekend also, so we had a bon fire at the camp site and it was awesome.  We had my faithful Boda Boda delivery guy bring us beer from town and we had a forest party.  Betty cooked for all of us all weekend while also tending to various other groups passing through.  She was a total champ.  Women here are amazing workers. 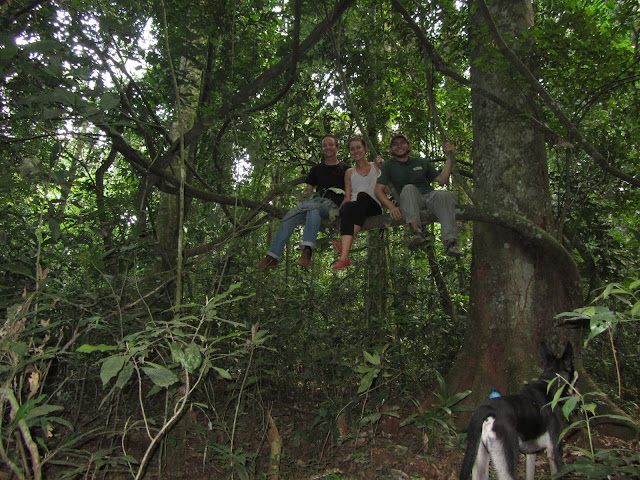 Caitlin came the next night and we had another forest party and a hike with tibbs the next day.

At camp, I live with completely renewable resources (solar power and rain water) and I’m pretty much vegetarian (except for some tuna packs my folks sent me).  It’s mostly rice, noodles, peas, beans and veggies (and bugs which are not strictly vegetarian).  Never-the-less, I’m sure I’ve never lived so sustainably in my life.  I have temporarily taken on a new comrade here, his name is Mr. Tibbs and he can be a real pain in the ass, but I’m growing to love him.  He’s my good friend Craig’s dog and he’s staying with me while Craig and Peace Corps figure out a new site for him.  One of his first nights here, Tibbs and I had a bit of a disagreement which resulted in a battle between us physically and a rift between us emotionally.  Neither of us are the type to hold grudges, so the next day we hugged it out and moved on, somehow with a better understanding of one another.  Tibbs is a truly handsom dog, a slim tridapple with a big head and big paws.  But he had a tough puppyhood, having been “rescued” by some Peace Corps Volunteers who didn’t have a great exit plan other than to dump him on a new Peace Corps Trainee and head home.  Craig, being the compassionate, dog loving man that he is, took on Tibbs only to find out that his site would fall through, leaving them both homeless.  Tibbs has since been displaced, moving between foster owners, without much stability and having never been properly trained.  He was given to Craig as a disobedient, overly energetic dog with attachment issues, so I place no blame on Craig.  Without much other choice, Craig has stepped up and done a really good job of making sure Tibbs is taken care of and being there as much as possible. But the reality is that it is very difficult to have a dog as a Peace Corps Volunteer, especially one drifting between sites.  Tibbs is spastic and neurotic, but still a loyal and good dog.  I know this because whenever he is going crazy barking at a motorcycle dropping someone off at camp, he runs to find me and make sure I’m ok.
I’m starting a chicken project, a topic which I know nothing about, but I’m excited for it.  My village chairmen and I decided, over a pot of Malua, to start up some kind of community agriculture project.  We decided chickens would be the best.  He introduced me to a very interesting fellow who had gotten degrees in accounting and agriculture and then moved back to his home village after checking out the job market.  And it turns out that he's dating Betty!  I'm happy she didn't end up with one of the village boys that always hangs around camp.  They're good people, but I have high standards for Betty.  Anyways, the chicken project is looking promising.  I’m going to do my best to advise and facilitate while making sure they do most of the actual work themselves.  I think the key to a successful project is local involvement and ownership.
There is some animal amidst the symphony of night life forest noises that I have named the banshee death owl, though I have no idea if it’s an owl.  Someone told me it was a bat, but I’m not buying it.  Bats use high pitch sounds for echolocation, not human like, shrill death screams.  It calls intermittently with about a second in between and it sounds like a mixture of a crow call and the final scream of somebody who’s had their throat cut open (sorry for the imagery, I’ve been rewatching Game of Thrones for the 3rd time).  It’s the only thing that freaks me out when I walk out to my bathroom before bed because I have no idea what it is.  Anyways, this night sound track still beats the tortured wailing of the tied up dogs back in Mukono Town.
Really, a lot of this first month has been me exploring the area and seeing what we have to offer around here.  Besides the cultural tour that we’re working on, I want to design a camping trip up on this really beautiful hilltop that you have to hike a couple miles to.  My idea is to use local kids as porters to carry the water and camping supplies up to this beautiful clearing on top of Namusa Hill.  A guide would stay with you overnight and make a bon fire and tell local folk tales and you could sip wine (BYOB) under the stars.  Then in the morning, the porters would come back and pack you out.  They would get some income for their families and the visitors would have a memorable experience. 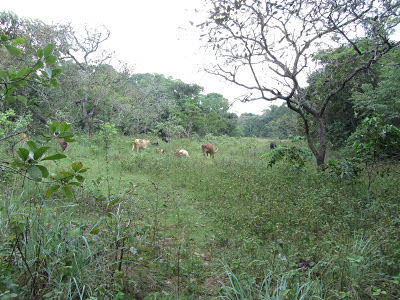 Clearing on top of the hill

Having Mr. Tibbs here has made me realize that it’s a bad idea for me to get a dog here.  So I’m getting a goat.  His name will come when I meet him, but I read that they are excellent hiking partners and they are much lower maintenance.  When you hand raise them, they follow you around and as a hooved quadruped, there isn’t any hike too intense for them.
My parents and my sister are coming to visit in April and I’ve been planning out that whole trip.  We’re using my organization to do pretty much everything which will be great both because they are awesome and because it will give me a chance to see firsthand how my organization looks through the eyes of the consumer and search for improvement.  We are going to spend a few days at my site and then head southwest for gorilla and chimp tracking and then hitting up a safari at Queen Elizabeth National Park and maybe Murchison Falls for some giraffes and zebras.  I’m super stoked!  And then my heterosexual life partner, John Edward Campbell is coming in June and that will be an entirely different and amazing experience.  Good things to come.
Posted by Aaron Blanchard at 4:09 AM