I was a counselor at Camp BUILD (Boys of Uganda in Leadership Development… or something), responsible for 8, 13-21 year old boys for a week.  It was a crazy week and the most memorable camper quotes were:
In reference to the entire camp experience, “You whites really know how to make funs!”

And, in a rousing night game of capture the flag, our team mate comes running back to our base grinning from ear to ear. He looks down at his prize and his face drops, it’s as if he’s just noticed he were holding a dead puppy.  He sees the red shirt decoy that he thought was the red team’s flag and gasps,  “Ah!  I have been deceived!” 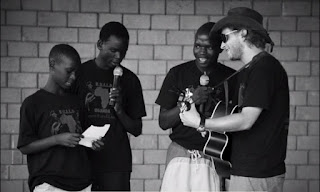 Being responsible for the health, safety, education and entertainment of a group of adolescents is uncharted territory for me, but I got really lucky with my Ugandan Co-counselor and my group of kids.  We had a great week and I think I learned more than any of those kids.  Highlights include a massive 5 team capture the flag game on the whole college campus which resulted in a stalemate because all of the bases were too awesome and impenetrable, a bitter rivalry between me and my co-counselor/nemesis Patrick Glisczinki which lead to many unsuccessful water balloon assassination attempts and ended with a pride-shattering glitter attack on my sweet camp shirt, my teams flag being taller than Patrick’s team’s flag, riddle battles and a giant mattress fort party/extreme Olympic mattress pit jump with the 85 mattresses rented for the camp after all the kids left.

I bought a goat very recently and I think Django Reinhardt Goatsly is going to show a real marked boost in my life awesomeness index.  As a hooved quadruped with propensity for following, he’s proven to be a great hiking partner.  When we’re not hiking, he just chills out and eats my weeds.  It’s a pretty low maintenance, awesome thing we got going on here. 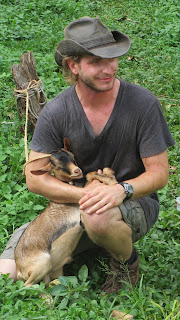 In other news, the next big project is going to be a Peace Corps Grant funded Mabira Forest Canopy Zip Line.  I may have bitten off more than I can chew on this one, but despite having no idea what I’m doing, it’s going ahead. 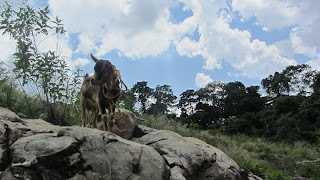 Camp is awesome as ever especially now it is filled with the bleats and charm of Django, and life is good.
Posted by Aaron Blanchard at 5:25 AM